Welcome to the Holidays! I've kept my schedule pretty simple on purpose to decrease holiday stress. Even so, I have a couple of superb events to tell you about.

Then on Dec 6th...I'll be signing my books, giving away goodies, and selling my Euro jewelry in Needham, MA from 12-4. We'll be 40 authors strong! All genres. Come one, come all, and wear your tackiest holiday sweater!  http://www.bostoneventguide.com/user/submit-an-event/event/7921-penny-watson-s-holiday-bash-and-bookfair

Other than dozens of chiropractic and acupuncture appointments for my stupid, chronic, pain in the neck, that's it for me. I love keeping it simple.

If you're still looking for a holiday gift, consider ordering a copy of Bake, Love, Write. That's 105 authors strong with each one contributing a recipe and advice on love and writing. Just right for the experienced or budding writer on your list.
Posted by Hot Ash Romance Novels at 8:24 AM 1 comment:

It's October! A fabulous month for all things paranormal. If you get too much horror and need something light and fun, check out any of my books!

My schedule is still coming together, but it's filling up fast! You know what else is filling up fast? Registration for Canada's first romance readers and writers conference in April! I'll be there. Will you?
Romancing the Capitol

Oct 4th
I'll be giving a talk to the Rhode Island Romance Writers called Writers Be Crazy; Secrets to the Creative Mind. This will be my first time presenting this material but hopefully not my last. I'm looking forward to it.

For those of you who like dealing with spooky, why not join us and do something cooky. From October 6th through the 23rd, over 30 authors are hosting a Halloween Scavenger Hunt.  Participants visit each site to find a Halloween graphic.  The more sites you visit, the more chances to win. There are over 60 prizes, multiple winners each day. On October 6th, visit Sloan McBride's blog Sloan McBride where you get all the information, including links to the authors' pages, and a link to a sheet to type all the answers. It should be wicked fun!  See you there.

Oct. 28th is my day to blog at Casablanca Authors

Oct 31st, Halloween Party!
Redz World would like to invite you to a Halloween Extravaganza...An entire day of fun and prizes. Many of your favorite authors will be there! Redzworld.

Posted by Hot Ash Romance Novels at 12:12 PM No comments:

Lots going on right away this month!

Hold the presses!
The Cupcake Coven series has been sold to a publisher! Lachesis Publishing has offered me a contract for all 3 books in the series. Look for the rerelease of The Cupcake Coven and Tug of Attraction, plus the January new release of book 3--Out of the Broom Closet!
For now you can enjoy all my other books, and there are lots of them! Find them on my website. http://www.ashlynchase.com

Sept 7th is National Sausage Day and I'm celebrating with a blog at Snark Mommy Reads as part of her Snarktember celebration. In honor of the day, I'm talking about my July release with Dalton Diaz and Terry Spear-- Gods Gone Wild. Talk about a sausage-fest! LOL Check it out. You'll love it!

Sept 13th is my monthly blog at Naughty Author Chicks. Check in and see if I'm still halfway sane. :)

Sept 20th is my day to blog at Casablanca Authors. Who knows what I'll be talking about by then! LOL
It probably won't be the new release or sale--not just because that'll be old news by then, but because this is the author's blog of my traditional publishing house. I may have a sneak peek of my next dragon book for you!

Speaking of that book, my deadline to turn it the finished manuscript is Sept 30th. No, you don't have to keep that in the back of your mind, but I sure do! I wish I could mention the title, but it hasn't been decided yet. LOL. Stay tuned!

Oh! I have one more event before the end of this busy month. I'm participating in The Romance Reviews month long party. (See my home page for details on this and Snarktember.) Loads of prizes, and I'll have a fun Q&A for readers on Sept 23rd. Don't worry, it's SUPER easy! I want lots of comments and someone will win one of my books!

Posted by Hot Ash Romance Novels at 4:25 PM No comments:

Happy August! We've had a gorgeous summer here in New England. I hope you're enjoying yours too.
I don't have many appearances this month, but I still have plenty of good news for readers! Here are my only scheduled blogs. Aug. 2nd you can read a blog post I wrote called Is This Book Cursed?
Find it here: Casablanca Authors And Aug. 9th I'll post my regularly scheduled monthly article at Naughty Author Chicks. I don't know what it'll be about yet. Any suggestions?

News! News! News!
I have a new release coming up. It's book 2 in The Cupcake Coven series called Tug of Attraction. It will release on Sept 1st. I'm telling you now so you can put it on your calendar!

Here's what you can look forward to: 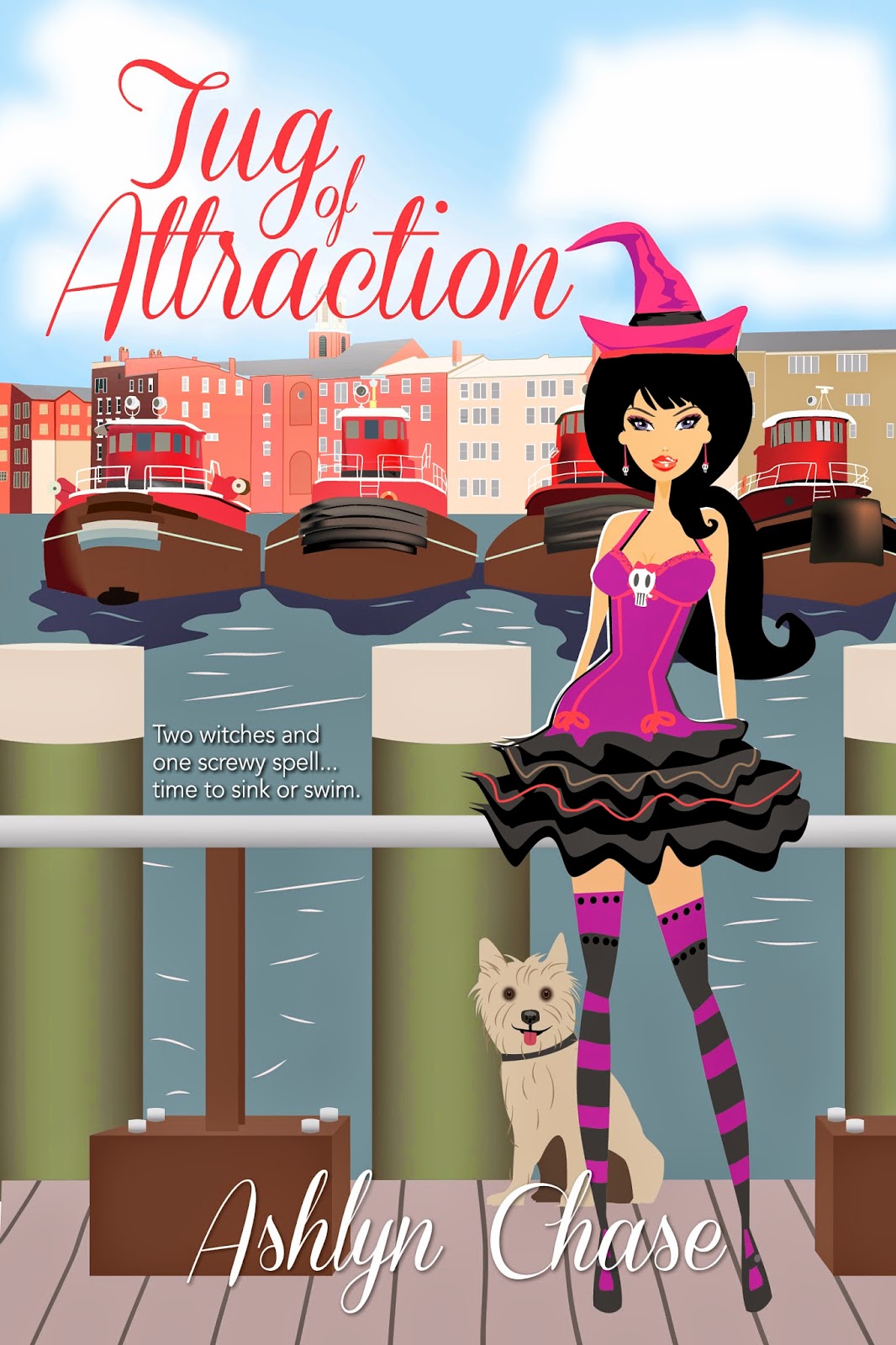 Two witches. One screwy spell. it's time for this tugboat captain to sink or swim!


Failed actress Brigit Love wants a baby, and she’d better get on that soon or it may not happen. She isn’t willing to marry just to get what she wants, so doing things in “the correct order” may not be possible. Even her Wiccan spells can’t turn back the clock.


Tug boat captain and coven member Ethan Cox loves his life as a happy bachelor and his only goal is to keep things exactly the way they are. He should be the perfect guy to plant the seed and walk away whistling. So how did everything fall apart?

Here's what my beta reader said:
"Good God woman, how do you do it??  Make these characters come to life and make me fall completely in love with each and every one of them?"

I really hope you'll give this series a try. The Cupcake Coven (available now) is #1. Tug of Attraction is #2, and Out of the Broom Closet will be #3 (Dec or Jan release.) Stay tuned!
Posted by Hot Ash Romance Novels at 8:44 AM 2 comments:

Hey, everyone!
I hope you're having a wonderful summer. Other than a tick bite that carried Lyme disease, I'm just peachy. Actually I was lucky. It was caught early so 3 weeks of antibiotics should fix me right up.

I only have one appearance this month. I'll be signing my latest trilogy Flirting with Fangs and The Cupcake Coven at the Danvers Yacht Club in Danvers, Massachusetts, on July 39th from 4 to 9 p.m.

Here's the skinny on the first two stories.

Two Greek gods, friends and partners in mayhem, taunt the wrong goddess whose
volcanic temper blasts a whole new island off Hawaii.
When Zeus finds out, he'll use their own worst nightmares against them.
Epimetheus stays to face his punishment while Dionysus takes off. He’s not as big a jerk as that makes him sound. He’s sure the powerful God will know who instigated the whole thing and follow, giving his friend time to get away. Zeus will be even angrier, but he has to catch them first.
Who knew a Greek god’s worst nightmare and greatest adventure could lead to true love?

Thanks, all!
Ashlyn Chase, Dalton Diaz, and Terry Spear

Posted by Hot Ash Romance Novels at 7:59 AM 2 comments:

Wow. All I have to do in June is write! (I can't believe it!)
I spent a week in New Orleans at the RT convention in mid-May, then I spent a week as a post-op nurse to my daughter, who was recovering in her old bedroom, and finally, Mr. Amazing was on a week's 'staycation' during Memorial Day week. He goes back to work tomorrow. (6/2) As much as I love having him around, I'm really not very productive when he is.

So, for me it's time to buckle down and make up for all those lost word counts!

Check back in July. I know I have a book signing scheduled for July 30th at the Danvers Yacht Club. More on that (and other news) later.

Have a fabulous June!

Ash
Posted by Hot Ash Romance Novels at 8:44 AM No comments:

I'm so excited about the release of my first Indie, The Cupcake Coven! I hope a lot of you will check it out. Join us for the Facebook Party the evening of May 5th at 7 p.m. (facebook.com/AuthorAshlynChase) You may see snippets from early reviews and cupcake recipes! If you have one you'd like to share, please bring it.

I won't be doing the usual blog tour, but I did agree to blog for a few friends, and I have a couple of group blogs I post to monthly. Here are those dates:

If you noticed a big gap in there, it's because I'll be attending RT--the big romance reader/writer/industry convention in New Orleans. Here's a link to the event. https://www.rtconvention.com/

The giant book fair is open to the public, so if you're not able to go to the convention, you could still meet me in New Orleans at the book signing. https://www.rtconvention.com/giant-book-fair Thank goodness they have us seated in alphabetical order or you'd never find me. There will be hundreds of authors at the fair!

So, it'll be a busy month, but a good one. I hope you have a great May too!

Posted by Hot Ash Romance Novels at 4:33 PM No comments:

Actually, May is a huge month and there's lots to do in preparation. My first Indie book is coming out May 5th, and guess what? In order to self-publish this and (hopefully) many more books this way, I became a company! Imagination Unlimited LLC, to be exact.

So, I'm opening bank accounts, applying for credit cards, opening a PayPal business account, etc. It's like starting over with a whole new identity.

Also in May, I'll be attending the big romance reader/writer/industry convention in New Orleans. Here's a link to the event. https://www.rtconvention.com/

The giant book fair is open to the public, so if you're not able to go to the convention, you could still meet me in Nawlins at the book signing. https://www.rtconvention.com/giant-book-fair Thank goodness they have us seated in alphabetical order or you'd never find me. There will be hundreds of authors at the fair!
Posted by Hot Ash Romance Novels at 1:41 PM 3 comments:

Lots of news!
First: Flirting Under a Full Moon is now available in audiobook! I was listening to it as I pedaled my exercise bike today and thought, Hmmm. Not bad. (That means it's pretty darn good. Authors are usually insecure masochists who flog themselves harder than any reviewer could. At least this one is.)
How to Date a Dragon will be released in audiobook March 18th.

Now, getting to the majority of my March schedule...
I have a new release coming out March 4th! Woo Hooooo! Kissing with Fangs, book 3 in the Flirting with Fangs series, releases that day. Yes, there will be a ticker tape parade.

On March 6th the blog tour begins. It's a little different this time.
Bloggers will be posting at least 1 scene (in chronological order) at each blog stop, so those who follow the tour will get to read the first two chapters, free! There will be a great prize at each stop for a randomly chosen commenter. The entire series!


6-Mar
Under the Covers
http://www.underthecoversbookblog.com/

Anyone who comments on each stop is eligible for yet another prize! A gift card to buy my next book!


I hope you all have a wonderful spring. It can't come fast enough for me!
See you around the circuit! 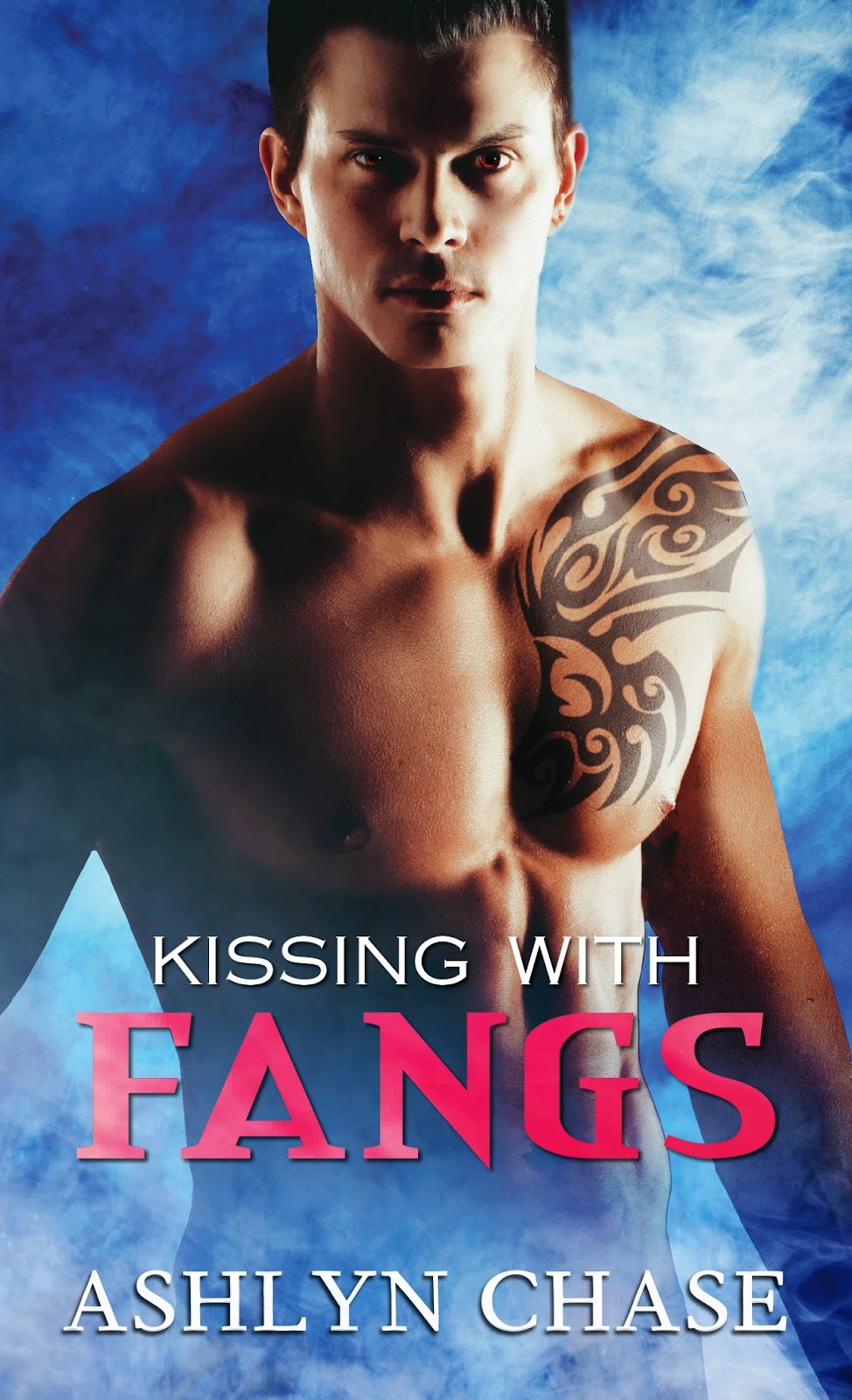