Wow! I've been busy! At last I have a moment to update you on the latest news.
First, a new release is coming on Thanksgiving! Laura's Upcycled Life peorder price is only 99 cents! It will go up to $2.99, so don't wait to order it! http://www.books2read.com/LaurasUpcycledLife 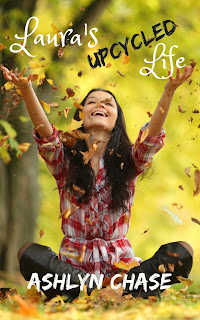 Laura McAuliff’s last relationship ended on an all-time low. Her ex-boyfriend, a criminal lawyer, gave her fifty grand to forget she overheard his assassin/client’s confession and vanish before the assassin makes her disappear—like forever.

Now she’s hidden in a tiny house behind a friend’s barn in Maine, upcycling cheap junk into one-of-a-kind treasures to put food on her tiny table. When she finds herself in a tug of war over a set of Mad Men furniture with a stunning blue-eyed asshat, they reluctantly split up the finds.

But Trace Dixon is more than a sexy furniture flipper. He’s an ex-military badass, and when he learns who she’s hiding from he’s intent on protecting her. He offers his address to keep her whereabouts a secret when she testifies. All she needs to do is leave a toothbrush at his place. His offer is tempting, but what if he wants more than her toothbrush—and the bad guys show up?
*
And in other sale news: Congrats to my Candian publisher!
"It's official we are celebration our 12th anniversary & discounting all #ebooks to $0.99. Come & celebrate with us https://t.co/gO20Q438W5" Of course this includes my Love Spells Gone Wrong series!
*
Now--another preorder! This is the first in a new series, so you won't want to miss it! If you read Boston Dragons, you met the Fierros--a legendary firefighting family. It turns out that's not all that's legendary about them. They are phoenixes! If the worst happens, they'll reincarnate in the fire. Find you favorite online store here: HookedonaPhoenix 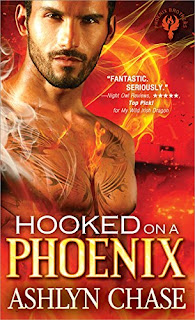 LOCKED IN A BANK VAULT TOGETHER...
THEY MIGHT REDEFINE THE MEANING OF 'SAFE' SEX

Misty Carlisle works as a bank teller in Boston's financial district. She's had more rotten luck in her life than most, except when her childhood crush shows up to cash his paycheck. Then her heart races and her mouth goes dry.
Gabe Fierro is a firefighter—and a phoenix. Like his brothers, his biggest challenge is finding a woman open-minded enough to accept a shapeshifter into her life. When his boyhood friend asks him to watch over his little sister Misty, he reluctantly agrees. But when the bank where she works gets held up, Gabe does everything he can to protect her. The two of them end up locked in the bank's vault...where things get steamier than either of them ever imagined.
Readers love Ashlyn Chase's Boston Dragons:
"This story has it all, laughter, tears, magic and sizzling heat."—Night Owl Reviews, 5 Stars, Top Pick!
"Snarky dialogue and sizzling heat."—Booklist

Okay, enough bragging. I'm just thankful I have lots of good news to share this month! Happy thanksgiving, everyone! I have so much to be grateful for!

Posted by Hot Ash Romance Novels at 8:55 PM No comments: Links to this post