Wow! Is it March already? I've been a little busy for the past few months. We got our condo in Florida ready to move into, and soon--we'll be moving! If that's not enough excitement, I have a new book coming out on March 26th...while I'm up to my neck in boxes!
Fortunately, it will be in all your Barnes and Nobles, Books-a-Millions, Walmarts, etc. And, of course any online outlet you prefer will have it too. I'm talking about the third and final book in the Phoenix Brothers series!

SO, let me tell you more about the series. The Fierro Brothers are actually a family you've met if you read my Boston Dragons series. 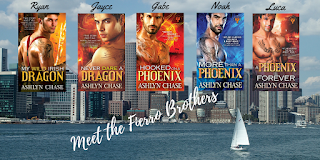 My Wild Irish Dragon told the story of two firefighters fighting over the same job opening. Chloe Arish (a dragon) went up against Ryan Fierro (a phoenix) of the legendary firefighting Fierro family. Ryan thought he was a shoe-in until he met the feisty Irish lass.

The next Fierro brother to meet his match was Jayce. In Never Dare a Dragon he fell hard for the New York Hell's Kitchen firefighter Kristine Scott (also a dragon.) After the dragons' stories were told, readers had fallen in love with the Boston Firefighters who could reincarnate in fire. That's when my publisher contracted the rest of the books to be sure mama Gabriella got her wish--to see all of her sons happily paired before she would agree to leave Boston for the Caribbean retirement her husband had been dreaming of.

Hooked on a Phoenix, Book 1 in the Phoenix Brothers series is actually about the middle Fierro son, Gabe and his best friend's little sister, Misty Carlisle. Unaware of what a beauty Misty would grow up to be, Gabe agreed to watch over her while Parker was deployed overseas. Big mistake. How could he keep his hands off of her when she clearly wanted his hands on her hot body?

Book 2, More than a Phoenix is literally about more than one Fierro brother. Dante and Noah Fierro are best friends, roommates, and work in neighboring firehouses. How was I supposed to keep one out of the other's business? It wasn't possible, which created some friction and some fun. Enter two women with their own little problems...artist Mallory Summers who sees dead people and accidentally shifts into a monkey when she's scared and ER Doc Kizzy Samuels, a witch. Yes, Noah's got himself a witch-doctor. All of these stories are light-hearted paranormal romances. 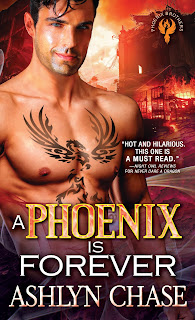 Well, I'd say I blew it because Luca, my youngest Fierro was bound and determined to become a cop instead of a firefighter--much to the annoyance of his firefighter father and brothers, but he was doing an admirable job. That is, until his neighbor's four-year-old daughter went missing. It wasn't his case and he was told to stay away from it, but he couldn't stand by and do nothing.

So what does he do? He comes upon a psychic, who faints at the sight of blood. Dawn Forest doesn't seem the least bit credible until she proves what she can do. Now despite the fact that an ex-gang girl and a rookie cop shouldn't even be seen talking together, the little girl needs their help and they both step up to do whatever it takes.

I'll admit this book wasn't as humorous as the rest--mostly because of the subject matter. A missing child is never funny. I had to resort to the veteran cops pranking the rookie for some of the humor. I'm happy to tell you all those stories--are true! I spoke to a few cops, each of which contributed some of the pranks they'd pulled on first year officers over the years. Of course, Antonio, the Fierro patriarch could be counted on for a good dose of comic relief too.

I hope you'll give the series a read and let me know what you think. If you want to write a review, that would be great--or if you prefer, just tell your friends who enjoy a good romantic read!

Thanks for enjoying my books and I hope you love this big, fun loving, Boston-Italian, phoenix family as much as I do!
Posted by Hot Ash Romance Novels at 10:31 AM

Hah! At least you don't hafta actually ship the books, right? I love this series and wish you much sales with this next release!

I love this series so hard anything phoenix related is right up my ally ..hot and serious but funny pranks all in one

One of my favorite series, I can't wait to read this last book!!!